If you ask any random person on the street, chances are that he or she will recognize the name "James Holmes," or at least be able to identify a picture of him. With his name and face having been plastered all over the news after the infamous 2012 Aurora, CO movie theater shooting, its no surprise that he is so easily recognizable. But with Holmes back on the front pages this week due to his recent psychological evaluation, a long-debated question is raised: should mass-murderers, such as Holmes, be awarded the "fame" and publicity that they always receive as result of their attacks? Even when it could give the killer exactly what they wanted in the first place (the publicity), and humanize an individual who has committed an inhumane act?

Though this issue is very deep and certainly not black-and-white, one of the key arguments for why publicity of the killer should be limited is a comparison to the media's rules on coverage of suicide. According to an article in the Atlantic, to follow these rules "the mass media rarely reports on suicides, particularly teen suicides. When it does, the coverage is careful, understated, and dampened." Along with dulling the details, the media also avoids mentioning methods or other things of that nature because "we know from research in many fields that establishing a path of action -- a complete narrative in which you can visualize your steps and their effects -- is important in enabling follow-through" (this method proved successful in reducing suicides in the Vienna subway in the 1980s - providing evidence that if applied to mass shootings, it would likely be successful as well). This same reasoning can be applied to the media coverage of mass shootings. When every move of the killer is described in detail and a face is attached to these moves, a potential shooter is able to relate to the situation. And, much like in the case of a suicide, they are able to "visualize" themselves going through with those actions. If combined with only a few other factors, this could lead us to be hearing about yet another tragic shooting on the next day's news.

Along with the public safety concerns of poorly covering mass shooting cases, many also argue that when dealing with a mass-murder, the attention should be focused on honoring those who lost their lives and not rewarding the killer with (often desired) fame. One author suggests that the name of the killer should be withheld for some number of weeks. This delay can decrease the "spectacle effect" and won't allow the killer to get raised to the same level of hype that the victims and actual incident are. The author also states that even if the name is leaked somehow before the official reporting, it will be "very different from the full blast of attention that currently surrounds the perpetrators immediately after each incident." This way, the public will both be informed on the incident and will have more concern for the victims (in place of the killer).


"No Notoriety," a group that campaigns for decreasing mass-murderers' amount of publicity, challenges the media to do the following things in order to appropriately cover an incident: 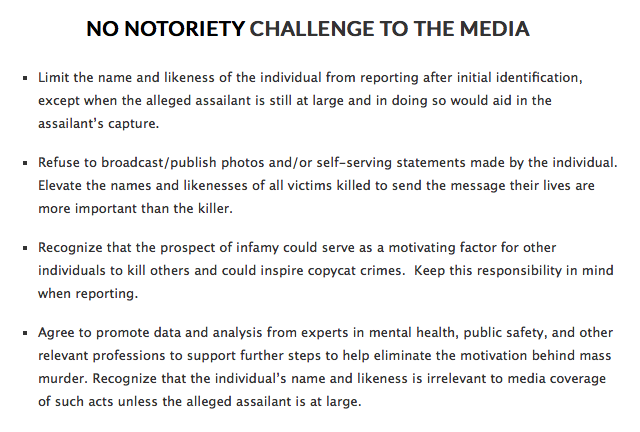 Often times when people and groups such as "No Notoriety" speak out against this issue, two obstacles are met: human nature (to want to know all or many of these details that happen to give the killer his or her fame) and how media functions (the business is to produce stories and inform the public, and there is exponentially more information to give out when the killer can be included or their actions described). But what we need to do is figure out how to balance the public interest in learning about a mass shooting with the public interest in reducing copycat crime. Hopefully, even if it's maybe not through controlling media coverage, we will soon be able to find a way to shrink the role that mass shootings play in our country today.
Posted by Abbey R at 1:22 PM

Here are the links to my submitted posts!